Queen of Tearling by Erika Johansen

I am presently in the middle of reading a trilogy that I am enjoying immensely.
Kelsea has come of age and out of hiding to be crowned the true Queen of Tearling. She holds powers and visions that she has yet to learn to control. Her country is in danger of being invaded by the evil Mort "Red Queen" who rules the next country just over the hills. This story takes place in a land that was inhabited by Americans and English fleeing their homelands in ships to escape tyrannical rule by men and technology. Will Kelsea's ability to see the distant past guide her decisions for ruling her country?
You may like this if you liked Martin's "Game of Thrones" or Deborah Harkness's "Discovery of Witches".
fantasy magic queens servitude

Popular posts from this blog

Bright Side Sanctuary for Animals by Becky Mandelbaum 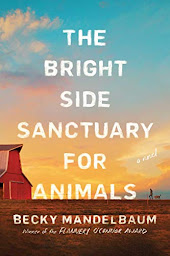 Ariel's mom, Mona, runs an animal sanctuary outside a small town in Kansas. Ariel hasn't been back home in years but after she learns of a barn fire at the sanctuary, she makes the trip back home to see if she can help. A story about the family baggage we keep close, letting go, and going home again.   A good debut and a quick read.
Read more

Son of the Black Sword by Larry Correia

This is the first book in his series "Saga of the Forgotten Warrior". Correia has created a fantasy world where boys from ruling houses are trained as warriors to uphold the law and where the casteless are not even considered human. The story revolves around one main fearless warrior, Ashok, who discovers a secret about his life that changes everything he thought was true.  Full of descriptive battles, demons and wizards, with all of them vying for power, this is a book for those that liked "The Witcher" and " Game of Thrones".
Read more

This is a really interesting take on differing perspectives between the narrator and his Pakistani family and friends. They discuss subjects such as politics, religion, and immigration in America and how life is in Pakistan. Some have made a complete break and other cling to their homeland. Billed as a novel, this rings more like a memoir.
Read more

Dixie
Yorkville, Midwest/Illinois, United States
I am your primary blogger. My name is Dixie and I have the awesome job of cataloging here at the Yorkville Public Library. My reading interests are varied so hopefully I will occasionally read something that will be of interest to you. If not, then please share what you are reading.